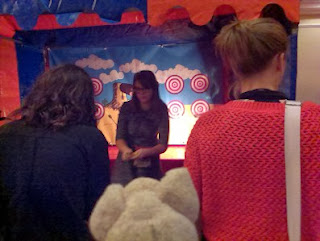 There were two games you could play. There was a ring toss where we won a book and next... 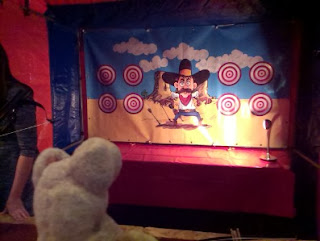 We got to shoot arrows with a crossbow!
You had to hit a target 3 times to win a prize. It took us only 4 shots to do that. 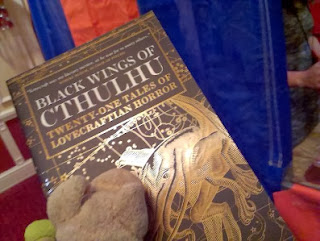 We won a book with stories about Cthulhu! 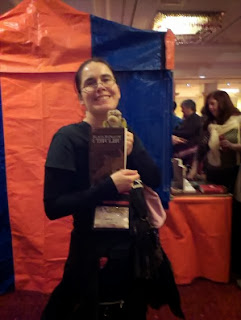 Both me and my owner were very happy with it. 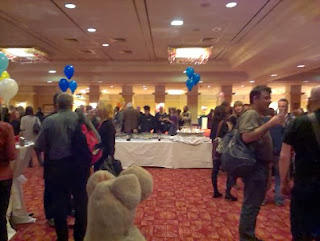 There was also popcorn and lots to drink. We hung around for a while before going to the next party.

Which was a party thrown by Amazon. 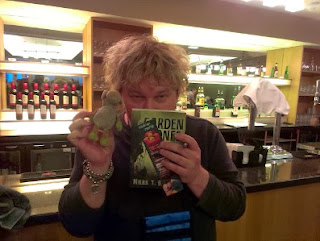 Here we met Mark Barnes, who signed his book The Garden of Stones for me, and shyly agreed to this picture.

Then it was time for the last panel of the day: 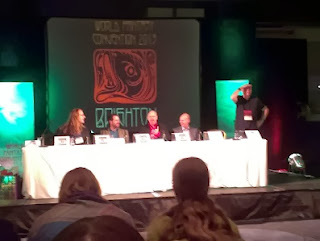 Elvish Has Left the Building.
Is traditional fantasy over? 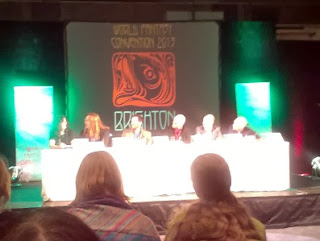 This panel started out interesting.
Adrian Stone (who is Dutch) confirmed what I told people when they asked about Dutch Fantasy writers: The Dutch want Fantasy writers to have English names. They don't think Dutch authors can write Fantasy.

They talked about how people don't want originality, but novelties and that because of that Fantasy will stay popular. They also said that it seems SF books have more fans, because people can more easily be SF fans outside of books as well, because of movies and tv-series. Until recently Fantasy fans only had books.

Soon however I got a bit bored, because once again one person (Tad Williams) started to dominate the conversation and it got a bit one sided.


Time for another drink!

So after the panel we headed towards the bar with Nikki. On our way we discovered that there were lots of free books at the registration desk. I might have gone in a small book frenzy...

After another yummy bottle of cider there were more parties.

The Jo Fletcher party had lots of books as well and I added more books to my haul. Next we went to the Del Rey UK party and we got a book there as well! At this point I was so high on books I forgot to take pictures.

Finally when my owner's shoulders couldn't take anymore we went back to our hotel. 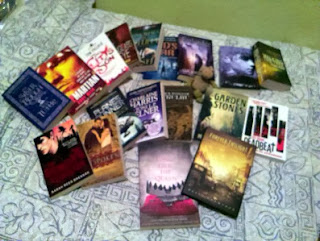 There we drooled over our loot of that day before catching some well needed sleep.


Coming next:
A beautiful morning

Seems like there were many more parties this year - how fun!

We like the photo of you and your owner Sullivan!

great pictures! nice seeing you! You had a lot of books that day! really impressing.

A great day and a great book booty! And you got to meet Tad Williams! And Trudi Canavan. Have you read Tad's "Groene Engeltoren"?

@Jeffe: and I didn't even go to all of the parties (missed two of them I think...)
@Aurian: I haven't read anything by Canavan or Williams. Maybe one day. I do know someone who could lend me books from Canavan anyway.