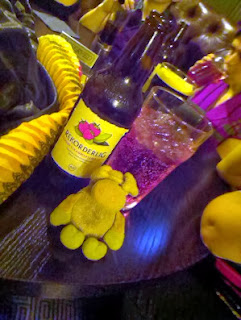 After the blogger panel we retreated to the bar and got a delicious Strawberry-Lemon Cider. We talked with Nikki and other convention goers. We dropped by for a bit at the Harper Voyager Party, which was very crowded, but mostly we were enjoying the cider, the comfy seats and the conversation, while waiting for the Mass Signing that evening.

And then it was time and we went to the room where the signing was with lots of books to get signed. 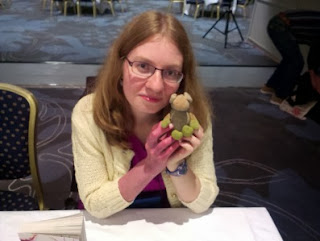 First we spotted Amanda Sun!
I love her Young Adult book Ink and I had promised Amanda to find her at the signing to get my copy signed. I had also wanted to buy a copy for a friend and get it signed, but just as Untold, Ink was nowhere to be found at WFC. 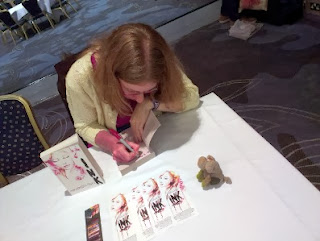 But I got my copy signed!
And it was great fun to meet Amanda and talk to her. 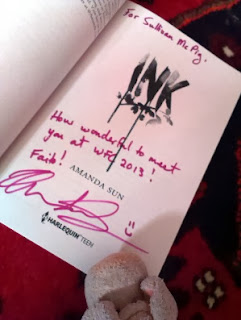 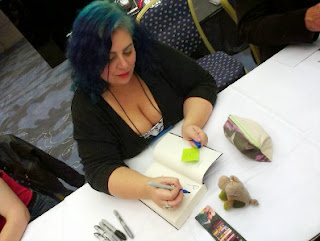 We also managed to find Holly Black and she signed The Coldest Girl in Coldtown for me. 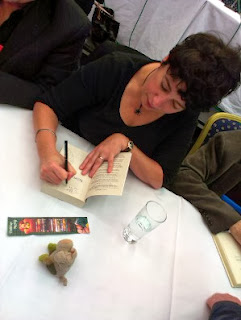 Joanne Harris not only signed my copy of Runemarks, she also drew a piggy for me! 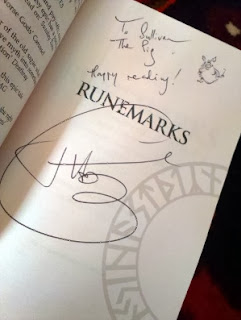 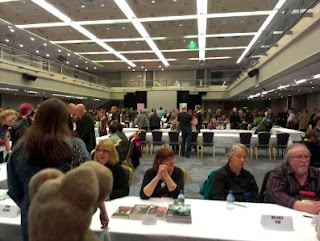 I still had a couple of authors to find and it was getting more crowded and difficult to locate people. Luckily I managed to find Keri Arthur and she signed a book for Melliane. I forgot to take a picture of that though. 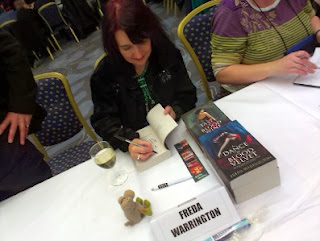 I met Freda Warrington.
I love her alternate history novel The Court of the Midnight King, but forgot to bring it, so I got a signed copy of A Taste of Blood Wine, which is about vampires. 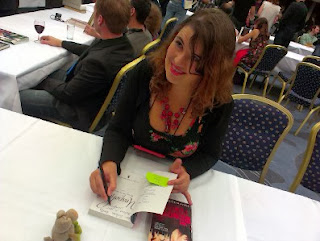 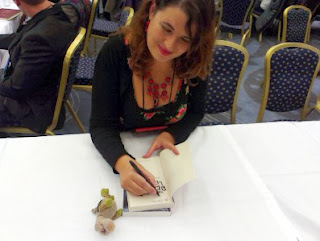 Next she signed our copy of The Demon's Lexicon, but...
Seeing what she did, I practically fainted! 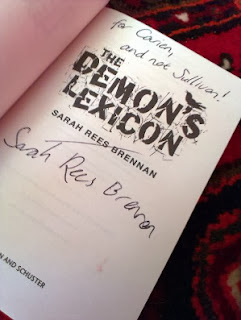 She signed it to my owner!
My owner was happy with that, but I think it's outrageous! 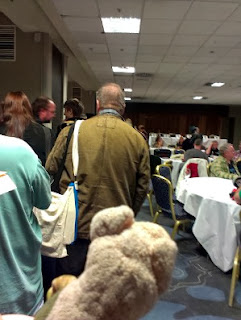 Next we stood in line to get Neil Gaiman to sign our programme guide and a couple of my bookmarks. Lots of people wanted him to sign books and stuff, so I didn't have time to take a picture. I didn't want to hold everyone up. 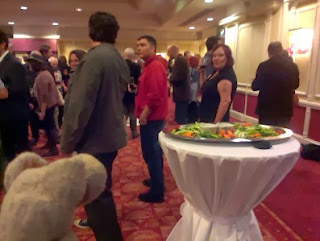 After the signing it was time for another party.
It was a party thrown by Bragelonne & Gollancz, two publishers. There was lots to drink and there was food as well. It was a fun party. we had something to eat and we talked to some people.

I had heard there would be Advance Reader Copies of Joanne Harris' next book at the party, but at first I couldn't find it. When Nikki, with whom we had been talking, left for another party, we decided to make one last round of the room and then head back to our hotel. It had been a long day after all, and I was getting pretty tired. 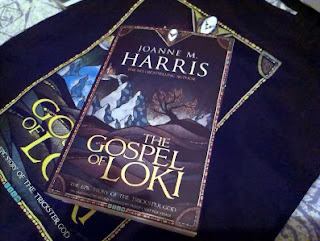 And that's when I saw Joanne Harris sitting next to a lot of goodiebags!
Inside the goodiebags were lots of different books, but I rummaged around and found The Gospel of Loki. 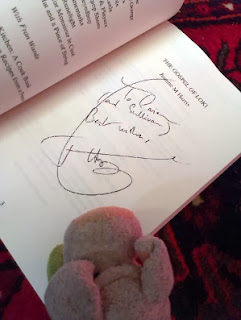 And with Joanne Harris sitting next to the goodiebags we managed to get it signed as well!
And although it's signed to my owner, this time I got included at least.

It was a really cool day!


Coming next:
Panels and Art

Still kicking myself that I wandered off at the moment that you discovered the awesome goodie bags. Ah well. Huzzah!

I wasn't brave enough to sneak away with two goodie bags :-(

I love that you were brave enough, however, to rummage through and get the RIGHT goodie bag!

@Jeffe: I really wanted The Gospel of Loki, because: Loki!

that's so nice, it's sad you couldn't buy another Amanda Sun book... At least you had yours. It looks like it b=was a really big day.

Sullivan,
Wow, you got to see a ton of authors. The book signings I go to have maybe only one author. I am jealous.

Was there anyone who writes from the foxes perspective?

I don't think so, but there was a publisher called Fox Spirit who had a cool fox logo.

Awesome day again Sullivan, but why do you look so yellow in the first picture?

Mood light in the bar.

Ooohh... you are a very brave pig to go rooting through goodie bags! But you succeeded which is the main thing! Hope your luggage wasn't overweight at the airport!

i'm only commenting now because i had to read all post for day 2 first it was too interesting. i'm really glad you got the goodies bag with the book you hoped for^^