After Terry Pratchett and his family and friends left I reclaimed my seat and talkED a bit with some of the other people who got relocated and were reclaiming their seats as well.

Then it was time for: 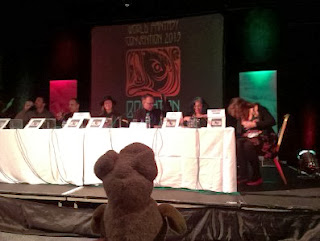 Not in Front of the Children: How Far Should You Go in Young Adult Fiction? 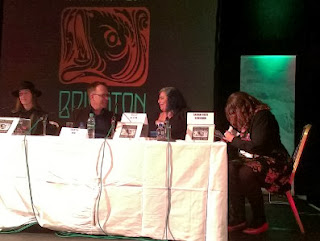 Another very interesting discussion.
All people on the panel agreed that teens can handle a lot more than adults seem to think they can. They also talked about how important it is for teens to discover they're not alone in feeling certain negative and dark emotions as a teen. Young adults are in a place they do/discover a lot of things for the first time, and reading about/discovering things like drugs for example in a book, is a safe way to learn about them.

Holly Black stated that it's not so much a moral choice to not write about certain things, she actually felt it's important to DO write about the darker things in life in YA.

They also talked about how people expect YA to have a lesson, where that's not expected in adult books. They agreed that this is not needed: YA should be for enjoyment just as much as adult books are.


Next was the panel I was very curious about: 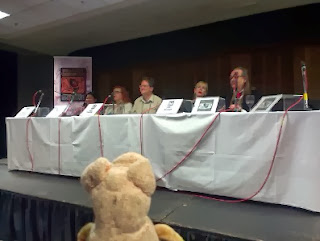 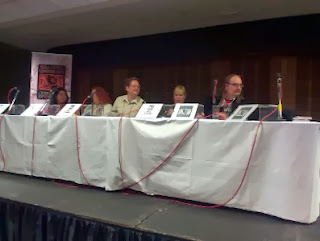 I had looked forward to this panel, because it would be about something I enjoy: blogging. I had expected an interesting discussion on how the internet and blogs has given us so many new ways to discover new authors and other fans.

There were some interesting bits, like how the internet created opportunities for people to think for themselves instead of going by the verdict of the columnists of yore. Or how people who didn't have a voice in the past can now be heard.

But in the end this panel turned out to be the Kim Newman show. He dominated the conversation and kept talking about how sad it was that the internet made the work of the true critic obsolete.

There were actually people who left the panel early. If I hadn't been sitting right in front with lots of bags, I might have too. But I endured, knowing I would need booze soon to forget about this panel.

The good thing was that afterwards my owner and I got to talking with Nikki, another blogger who we had seen at a lot of the same panels as we went to, and who was also displaced at the Terry Pratchett conversation. It turned out we had a lot in common, so off we went in search of booze.

Carrie at In the Hammock Blog said...

A good moderator should keep a panel from becoming the Anyone Show. Bleh!

I agree there should not be a lesson in YA. I myself would never have read books like that too, so why would a modern teen do so?
None of those names are familiar to me.

@Jeffe: it was indeed not the best moderator I saw in action that weekend.
@Aurian: Oh, Holly Black and Sarah Rees Brennan write really cool books!

"True" critic??? Are they the ones whose opinion is supposed to count, or something?? Or is it like "True" artists being the ones that sell lots of paintings? Rearrange the following words. Arse, Head, Up. !!!

Lol a true critic is probably one who is paid to be critic ... and now he has so many free competition, he is not paid anymore.