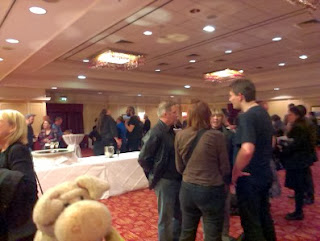 And then it was already time for the last World Fantasy Con event. The Dead Dog (post awards) Party.

One last chance to get to talk with people and to take some last WFC pictures. 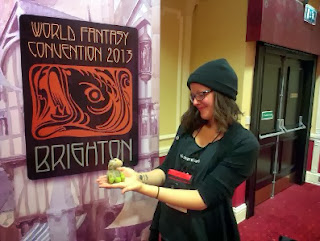 I of course had to have a picture of me and Nikki.
I'm very glad we met her. It was very cool to hang out with her and I really hope to see her again at a future con. 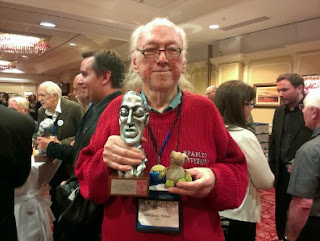 This is William F. Nolan.
He co-wrote Logan's Run and wrote the sequels to it as well. Nolan loves pigs, so I had to have a picture of him. Nolan won an award at the award thing. The award is shaped like the head of Lovecraft! 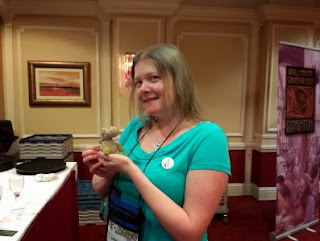 This is Mhairi Simpson.
We were introduced to her by Suzanne McLeod. Mhairi edited the Tales of Eve anthology, and she writes Fantasy stories. She's a fun person and I need to get hold of her stories one of these days. 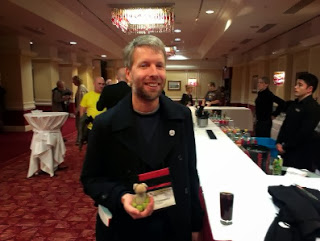 Mhairi in turn introduced me to Adam Christopher.
Adam Christopher wrote Empire State, a superhero-noir fantasy thriller set in the other New York. I haven't read it, but Mhairi told me it's very good and that I really should read it. 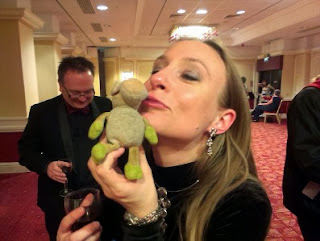 I also had to have a picture of me and Joan De La Haye.
Joan was staying in the same hotel as my owner and I, and we talked with her every day at breakfast. She's a very cool lady AND she wrote a zombie story! I got my trotters on a digital copy of Oasis as soon as i got home from WFC. Now I just have to find the time to read it. 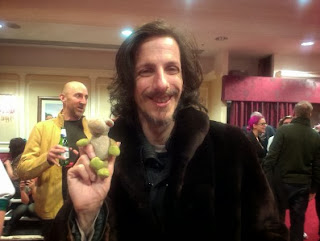 and last, but not least: Hal Duncan.
i haven't read any books by Hal Duncan yet, but hearing him speak on one of the panels I now totally want to. I'll be getting my trotters on one of his books soon.

Overall the Dead Dog Party was aptly named though. Apart from those few authors I managed to get a picture with, there were not many authors around. Most either went home or left to take a well deserved nap. Still, we had a fun time hanging out with Nikki and trying to find authors to take a picture with (my owner may have scared off Patrick Rothfuss).

We also managed to acquire a hanger-on we hadn't counted on, so finally we called it a night. We said our goodbyes to those few people we knew that were still at the party and to Nikki and then went to our hotel to pack our suitcases. We would be travelling back home the next day.

Coming next:
one last meet up with Beanie

ooh - I want to know who the creepy hanger-on was!

Oh I don't think I knew all these author, I don't recognize the names.

Fun last post Sullivan, so sad it is over. You do know that De La Haye means Van Den Haag...? Does she have a Dutch heritage?

She's from South Africa, so my guess would be: yes.