After saying goodbye to Beanie I went into the Brighton Metropole hotel for registration.

After getting the name tag that my owner had to wear so we could get into all the events we got a goodie bag. We could pick from lots of books and I managed to find some zombie books among them as well. How cool!

Then we went to the bar for a drink where we met S.J. Higbee and her husband. They kindly invited us to have a drink with them when they noticed we were feeling a little bit overwhelmed by our first con. It was lots of fun talking with them and thanks to their kindness we had a great start of WFC 2013.

And then it was time for the first panel: 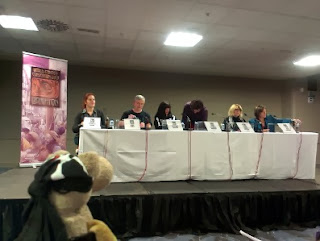 I Lurve Fantasy: Is There a Place for Genre Fiction in Romance? 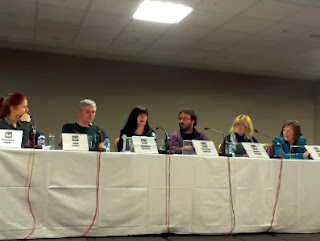 It was a very interesting discussion.
They explored the differences between Paranormal Romance and Urban Fantasy, talked about the importance of romantic elements in any story that is about relationships and how the changing times also change how romances are written. They stated that in PNR the Happily Ever After with a strong hero is important: the romance is the focus of the story, while in Urban Fantasy the focus is different and the heroine is the hero of her own life, she doesn't need the hero to complete it.

I wish I had taken more notes, but that first day I was still a bit dazed about even being at the con, so that's all I can tell you about this panel.

After the panel I got to say Hi to Suzanne McLeod and she told me to meet up with her at the bar at the end of the afternoon. 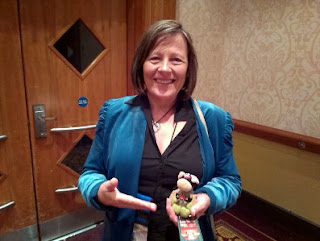 I also got to meet Keri Arthur and she was nice enough to pose with me for a picture so I could show Melliane. Keri also gave me a cool signed tote bag and I told her I'd look for her at the mass signing the next day, because I brought a book for Melliane that I wanted to get signed by Keri. 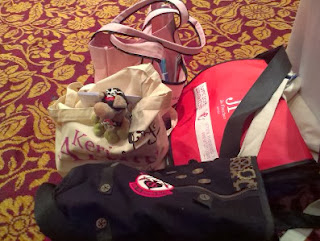 Next I visited the Dealer room, which was filled with lots of stands that had awesome books. I did manage to restrain myself a little, but did buy two books by Suzanne McLeod I didn't have yet, a book by Will Hill and some magazines. Together with the books we got when we registered we were collecting quite a load of books.

Then it was time for our second panel: 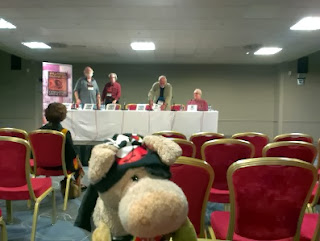 Foxed, Slightly Bumped and Needs Recharging...
This was a panel about collecting books and memorabilia.

panelists: Justin Ackroyd (moderator), Peter Crowther, Greg Ketter, Robert S. Knowlton, Padre AAllen Lewis and Michael Walsh.
These guys were all unknown to me, so I forgot who's who. Sorry.. 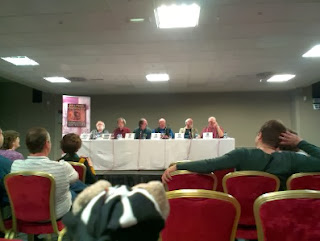 The panel started out interesting enough with the panelists telling why people like collecting, like trying to hold on to a certain memory, to have a connection with the author, things like that. Soon it went the direction of a moan about how young people don't collect anymore and how the internet ruined the art of collecting...

I stopped taking notes at that point... 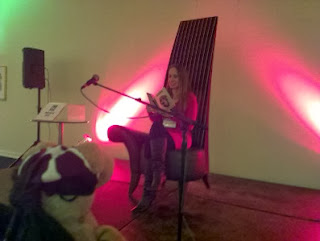 Next I went to a reading by Joan De La Haye.
She was staying in the same hotel as my owner and I. We had a chat with her at breakfast, so we were a bit curious about the kind of books she writes. It turned out she wrote a zombie novella!! The bit she read to us at the reading sounded very cool and I was ready to buy the book right there and then, but unfortunately enough she didn't have it for sale. I did get her card though, so I could look at her website and track the book down.

After the reading it was time to find the bar and... 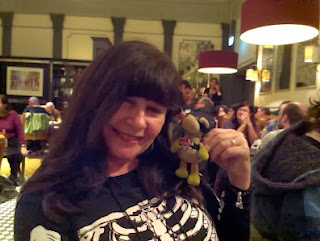 Meet up with Suzanne McLeod.
She turned out to be just as nice as she is online, and it was so cool to meet her and talk to her. 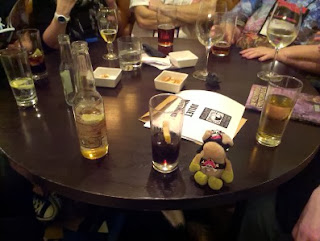 She introduced us to other people and we had a drink. She also was kind enough to let us store our bags in her hotel room. 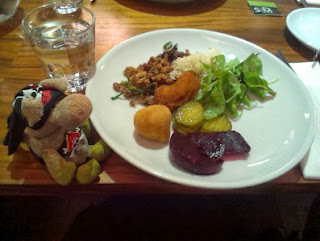 Next we went out for dinner with Suzanne and her friends. There was a buffet with lots of yummy food. We had a great time.

Wow!!! That sounds really interesting!! And good food too!

It was so lovely to meet you and your owner, and really great you both had such a fab time! (I also think you're wonderful photogenic - and thanks for posing with me when I look like I've been hitting the booze . . . uh, wait, maybe I had been! Opps *g*)

How wonderful that you finally got to meet the person to whom you've been chatting on line! That food looks beary yummy too!

So Cool! I actually know some of the authors in your first panel, but none in the second. Having dinner with a favourite author is so much fun!

Eating with your favourite authors what a dream!

thank you so much darling! I love you!!! yes you heard right, I really love you. I'm happy you had a great time and I would have loved to meet so many wonderful authors!

@Suzanne: I loved meeting you and talking with you
@Melliane: the feeling is mutual *hugs* And who knows: we might go to a con together some time

It was lovely to have dinner with you that night! I'm enjoying seeing your pictures from the con, I'll have to put some of mine up soon.