Next I visited the Dealer room again, because some new stands had popped up since the day before. I really hoped to find Untold by Sarah Rees Brennan, but that was not to be. I did see two of Cthulhu's cousins though!


After that it was time to visit the Art room to look at the art on display. 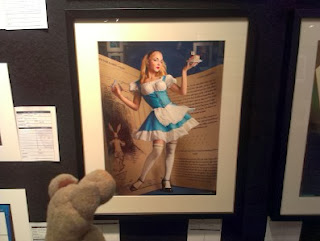 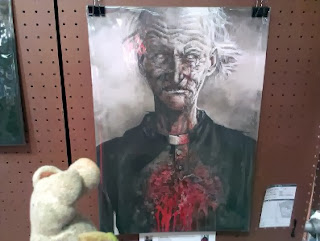 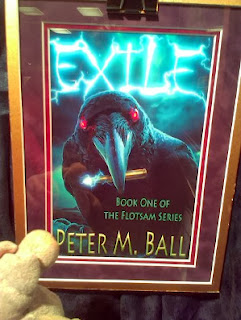 And a raven!
I really love this one.


Then it was time for another book launch: The Alchemy Press Book of Urban Mythic, an anthology with stories about Urban magic. 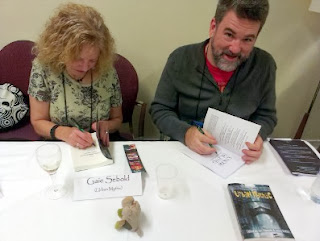 There were a lot of the authors who had a story in the anthology, and they were signing the book. Among them was Christopher Golden!! He wrote Soulless, one of the better zombie stories I've read. I totally forgot to bring my copy of Soulless to get it signed, but Christopher Golden was kind enough to not only sign my copy of the Urban Mythic book, but also a teaser of his upcoming horror story Snow Blind. I was very happy with that! 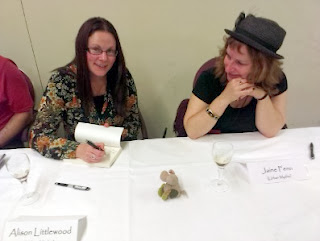 The woman on the right of this picture is Jaine Fenn. I haven't read anything by her yet, but on the first day of the con I was told to read her books, because they are very good. I now can at least read her story in the Urban Mythic book to see if I like her writing. 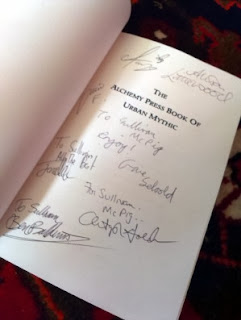 We got some hot chocolate in the bar after the signing and then it was time for another panel. We got there early and got a great seat right up front. 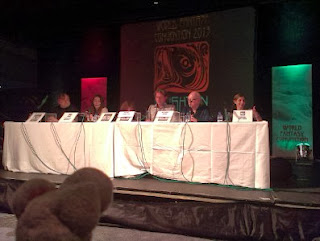 The End is Now.
A panel about the popularity of Apocalyptic stories. 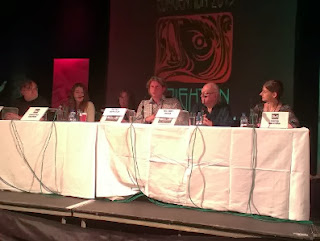 A great discussion!
They talked about how apocalyptic tales give you the opportunity to show people in a totally different light, because they are in situations you don't have in a contemporary setting. There was a discussion about the difference between a satisfying ending and a happy ending. William F. Nolan stated that readers deserve a happy ending as a reward for the time they spend with the book and characters. He felt very deeply about this and stated it multiple times. They all agreed that it's at least important to have hope at the end of a book, so you don't leave the reader with a book hang over.

They also talked about how in some countries people already live in abominable circumstances and if an apocalypse might actually make some things better/easier for these people. Other things that were mentioned is that writing in a post apocalyptic setting is easier than having to write in a contemporary setting, because you can make things up yourself. This led to the question if Dystopian fiction is partly about not having enough imagination to envision our future, and if the fast change in science scares us, and if that might be the reason there's so many apocalyptic tales out there.

All in all it was a really interesting discussion that I enjoyed very much.

Great summaries Sullivan! Sounds like you had a great time. I thought the difference between female authors (character focused) and male authors (plot focused) was beary interesting...

Such an interesting conference...although, Jerry seems to be fixated on your hot chocolate...

Thanks guys. And it was very yummy hot chocolate.

This is so awesome, I am coming with you next year!

I loved that panel. Right down to Nolan not seeming to know what it was actually about. And next...the Terry Prachett tragedy!!!

it's a nice picture of ALice. I didn't know this anthology but now I'm curious to see how it is.