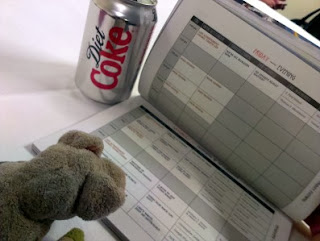 Next we sat down for a bit to catch our breath, have a drink and figure out what we wanted to do next. 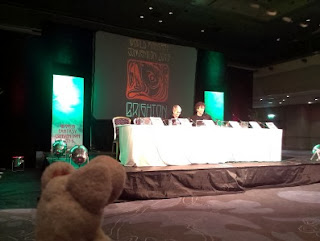 I will confess I have never read anything by Susan Cooper, but I was curious about her, and with Neil Gaiman there as well, I was sure it would be interesting. 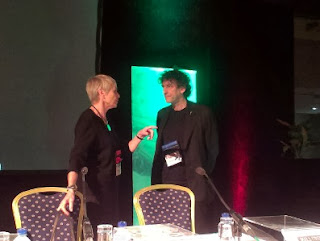 And it was a very interesting and fun conversation indeed.
They talked about Susan's career and books, about living in America as a Brit and more.

People asked them how they thought about fan fiction and Neil Gaiman told this is a very sensitive and touchy subject. He once made a remark about fan fiction that got lots of people angry at him, even though he didn't mean it as people took it. Since then he got more careful. He did tell he wished he could unlearn that there is lots of Good Omens slash fan fiction out there.


And next there was another panel: 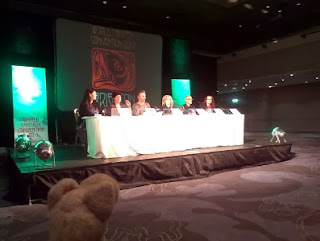 Nifty Shades of Fae.
Why are we fascinated by fairy tales? 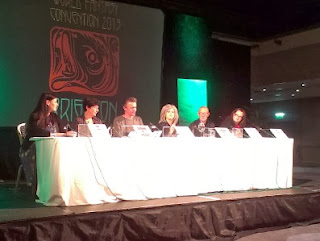 They talked about how the reason to tell fairy tales has been the same throughout the ages: to give reassurance and to act as a lesson. They are coded stories to tell about the meaning of life.

There are a lot of universal archetypes and these keep returning in stories even without the author realizing. If a reader discovers a certain meaning/archetype in a story, you can almost be sure it is indeed there even when the author didn't do it on purpose.

Joanne Harris told that her book Sleep Pale Sister is based on the archetypes in Tarot.

All panelists agreed that Angela Carter has been a major influence in reintroducing fairy tales. They also talked about the difference between mythology and fairy tales.

So far the panels on Saturday were all really interesting.

I'm kind of amazed you'd never read Susan Cooper! I grew up reading her, and even went back and bought some of those books as an adult and reread them. Major influence for me (who I forget to cite, I now realize)