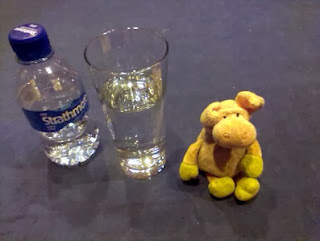 I started the day with a so called KaffeeKlatsch with Holly Black and Sarah Rees Brennan.
Basically it was a talk with the two authors and some fans over coffee. Or water in my case. 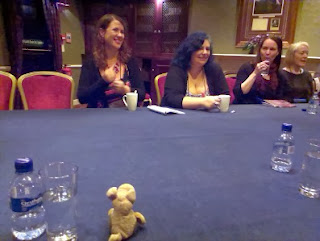 It was lots of fun. Both Holly Black and Sarah Rees Brennan are very cool and funny people. They talked about how they met, about their books, and we had discussions about things like The Walking Dead. It was pretty awesome and the time went by much too fast.

I even had to run to be in time for the next panel: 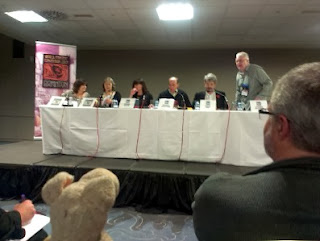 All But Actors on a Stage: Creating Memorable Characters. 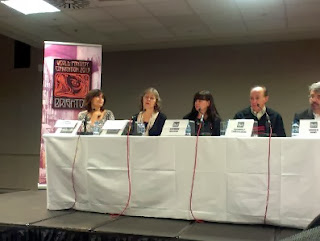 This was yet another very interesting discussion. It was interesting to hear that the female authors started with their characters and build their stories from there, while the male authors had the tendency to start with plot. I wonder if that's usually the case or just in this particular group of authors. One of the panelists said there were no memorable characters possible in a genre like Science Fiction, but Robin Hobb countered with a whole list of memorable SF characters.

I especially thought the females on this panel had interesting things to say about characters. They talked about learning to listen to your character (which is part of your subconscious) to make the story work, and gave examples how they got stuck in the past when they tried to force characters in a certain direction.

They also talked about naming characters, and Suzanne McLeod told about how she had three characters named Peter in her first book, before someone pointed this out to her.


After the panel I talked to Suzanne McLeod and she returned my books, all awesomely signed. She also gave me some really beautiful Spellcracker pencils and cards. She really is a very cool lady! 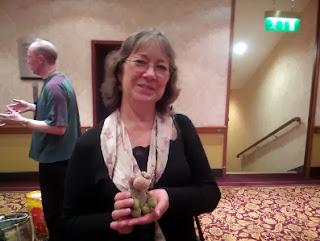 I also managed to get a picture of me with Robin Hobb.
I love Wizard of the Pigeons which she wrote under the name Megan Lindholm. I also read some of the other books she wrote under that name. She was very kind and gracious.


Next we went in search of the bathroom, but instead we found: 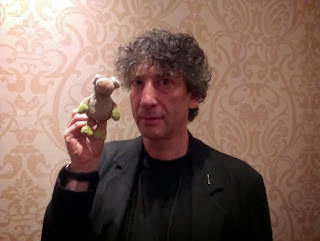 Neil Gaiman!!!!
He was the master of ceremony of WFC, so I knew he was at the con, but to just run into him! And then he even agreed to be in a picture with me. I tried to keep my cool, but I'm afraid I acted like a total fanpiggy, telling him how great it was to be able to tell him how much I love his Sandman comics and the novel American Gods.

And standing next to Neil Gaiman: 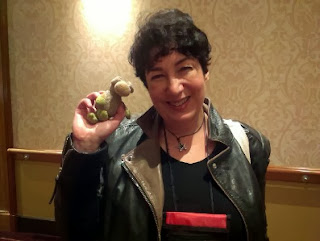 Joanne Harris!
My owner loves Chocolat and on our way to WFC we started on Runemarks which is even better in my opinion, so it was awesome to run into Joanne Harris.

She also agreed to a picture and we talked for a bit. She told us about Zombie Run, an app for your phone that helps you train to run away from zombies. She is a very nice lady, and if I wasn't already reading her books, I would have started on them after meeting her.


After this I had to find my calm again.
I must say I wonder how it is that meeting someone like Neil Gaiman can totally throw me, while talking with Joanne Harris or Suzanne McLeod (who are both awesome authors as well) didn't reduce me to a babbling fool. It must be this rock star status that Neil Gaiman has acquired over the years.


Coming next:
Art and autographs

You're a star Sullivan!

O wow, you met Robin Hobb! I love her books! I've seen Chocolat, does that count? (It has Johnny Depp).

Thank you for sharing your grand adventure, we enjoyed reading it!

wow that was a lot of falous author today! It's so amazing, I'm impressed, I think I couldn't have found my words lol