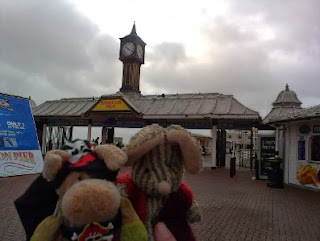 Next Beanie showed us the Brighton Pier. It's a big wooden pier that has all kinds of building on it with fun things you can do. 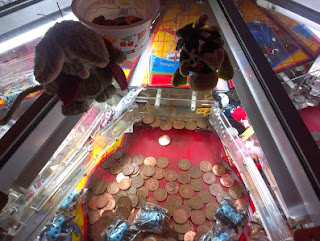 We played Arcade games.
It was a lot of fun. You had to put 2 penny coins in the game and try to shuffle the money that was already in the Arcade game to the exit slot. There were cool prizes on top of the money that you could win as well. 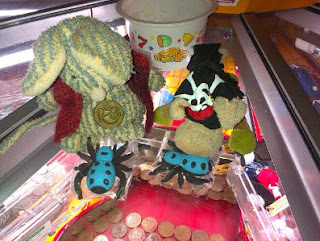 Success!
We both won a cool spider toy. 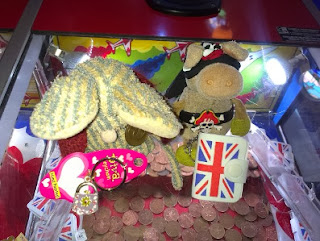 We played some more and won a pretty key chain and a small notebook. I'm going to use the notebook to write down notes about my travels. 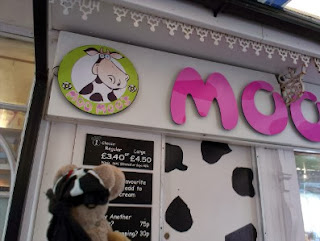 After the excitement of the Arcade games we explored the pier some more. I spotted this cool cow sign. 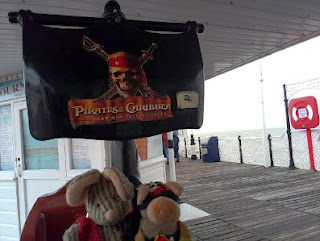 And a pirate ship!
We had to take a picture of that of course: Sullivan the pirate with his pirate ship! 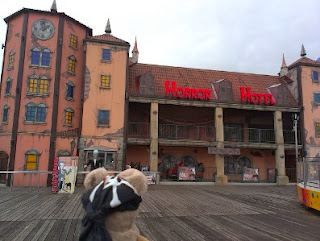 There was a spooky house on the pier as well. 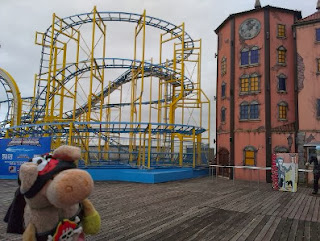 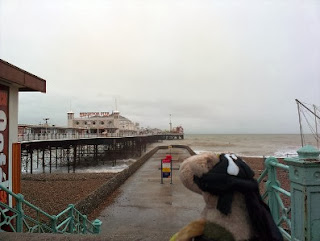 A final look at the pier before we went into town again for... 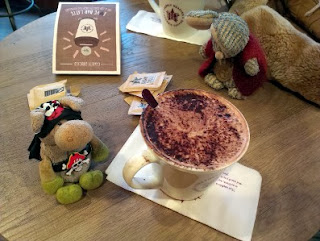 Hot chocolate!
After the windy seafront we could use something to get warm again.

After the hot chocolate we started slowly making our way towards the hotel where World Fantasy Con was held. 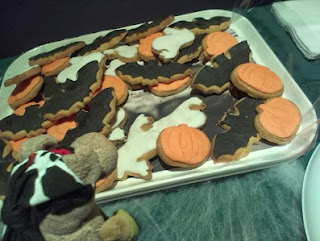 On our way there we made a stop at a cinema and they had cool Halloween cookies there. 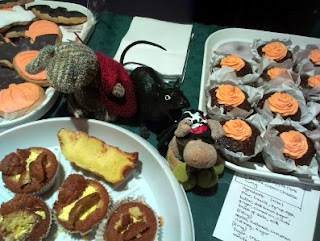 There was a rat guarding the cookies, and he told us they were to make money for charity, so we gave him some small change to help out.

Soon after we reached the convention and I had to say goodbye to Beanie, but not before making an appointment to meet up again on Sunday for more exploring. It was a great morning.

Coming next:
The first panels at the convention and meeting amazing authors

Posted by Sullivan McPig at 5:00 PM

I am so jealous!

You're a lucky pig to win so many cool prizes!

What a wonderful day, Brighton pier, cookies and hot chocolate AND Beanie! Hope you had fun too at the convention!

thanks everyone! I had a great time

Great post Sullivan, and that Arcade game is my big addiction at the "kermis", so I try to stay away from it. Those cookies look great!