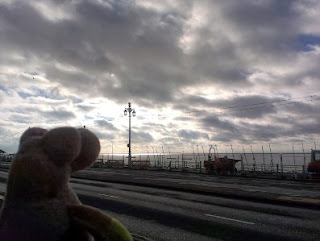 Saturday morning it was grey and it looked like rain. I had planned an outing for Sunday afternoon with Beanie, but everyone who heard about it, told me it would rain all day on Sunday...

But it wasn't Sunday yet.
Saturday started with more interesting panels, starting with: 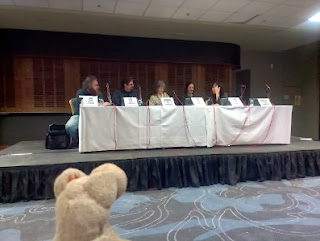 The Best of All Possible Worlds.
A panel about world building. 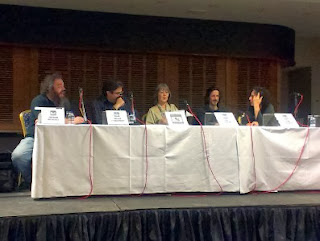 There were so many interesting things being said, it is difficult to recount everything.
They talked about how important it is to have an explanation for everything in your world, even if you don't give that explanation in the story, you should know it yourself to make it work. Like why everyone speaks the same language for example, or how your currency system works.

They also talked about how important it is to make people believe in your world, and how just hinting at things can make sure the readers fills in the blanks themselves. And how the curse words that people use, can show what kinds of things are taboo or how society looks at women.

And lastly: be careful with what language and words you use. Certain words give a certain weight or create friction. Like the word comrade or the name Mozart the Barbarian.


Next it was time for another YA panel: 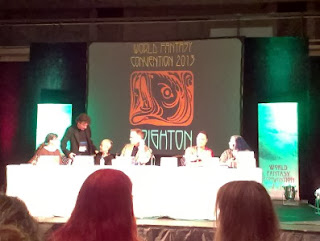 Are All the Best Genre Books Now YA?

panelists (left to right when seated): Delia Sherman (moderator), Susan Cooper, Garth Nix, Neil Gaiman, Will Hill and Holly Black.
(sorry for the brightness, there was a nasty spotlight) 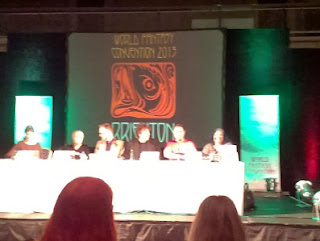 In the end this panel was more about exploring what Young Adult is, instead of it really being about the official topic, but still it was very interesting.

They talked about how YA is a sub-genre manufactered by publishers. They told how when they were teens they couldn't find books like the YA of today, and that it was normal to go from children's books to adult books at the age of 12/13. Harry Potter and the books that came after paved the way for the YA genre.

Neil Gaiman told how he tried to sell Coraline in 1991, but it was unpublishable back then. Only when Harry Potter was a craze he managed to get Coraline published. Because Coraline came out in a year between two Harry potter books it suddenly got lots of interest.

Holly Black told how she thought as a child that all the books had already been written, and that books were something that had been written by dead guys. When a new book got published in a series she loved, she was shocked.

They also talked about what makes YA interesting and said it's because it's full of energy. There are lots of big choices about who you're going to be. It's the first time for lots of things, a time of discovery.

All in all another really cool panel. 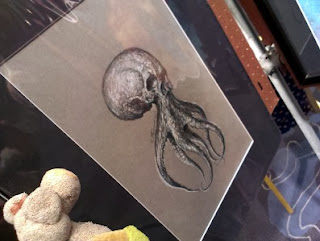 Next we wandered around a bit and looked at the art some more. I really liked this octo-skull. 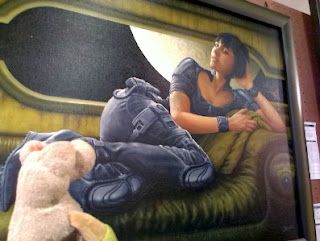 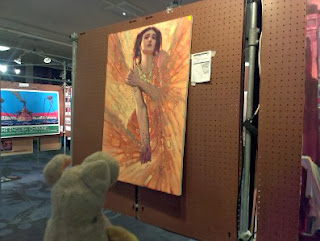 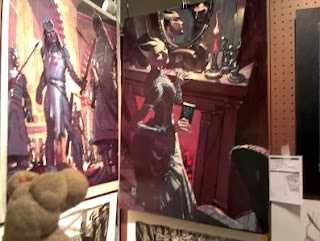 Coming next:
A conversation and a panel

I have read some Garth Nix stories.