After the The End is Now panel it was time for the conversation between Terry Pratchett, Rob Wilkins and Rod Brown. I'm a huge fan of Pratchett's books, especially the ones with Granny Weatherwax, so I was very excited to be able to hear Pratchett speak. And I already had a great spot!

Just minutes before it started and with all the seats everywhere filled, someone came over and told me and the people next to me we had to move to make room for friends and family of Terry Pratchett...

I was very disappointed, but finally managed to sneak back in one of the seats when it turned out the friends and family didn't need all the seats. But I lost my great spot right in front of the table :-( 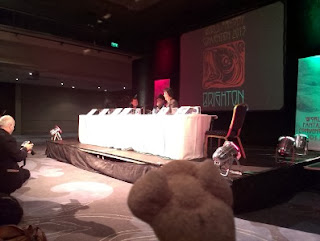 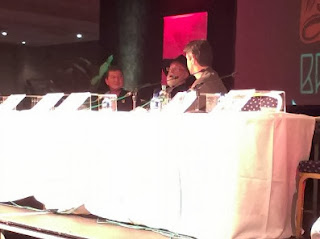 I must confess I was very impressed to be present during this conversation.
I didn't make many notes but I did film part of the conversation.

I did write down what Terry Pratchett told about two of his chickens. He has one chicken named Biggles, because she can fly, and one named Houdini, because she keeps escaping. I approve! 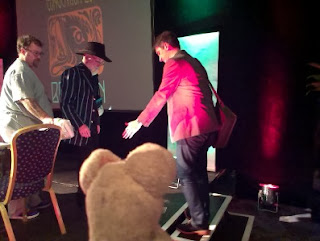 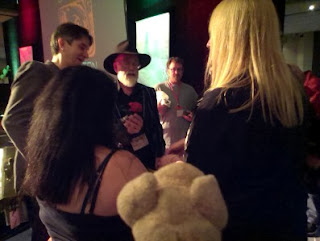 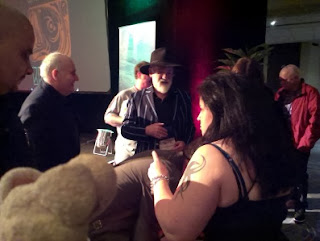 Terry Pratchett didn't do a signing, but I did manage to get close enough to take some pictures when he left.

I'm very happy I was able to attend.

Hmm. Making a mental note of that. Poorly played by TP's family & friends. If they wanted front row, they should have reserved it. Not right to boot fans who got there first.

It was lousy planning I think. Still managed to sit in the front row in the end. But I couldn't believe it when they told me to move.

Sullivan deserves a reserved place because he is such a famous pig.

Friends and family can see him every day, the should be sitting in the back. I am very sorry you lost your prime seat Sullivan, but I am glad you had such a wonderful time.

@Jerry & Ben: I thought so too.
@Aurian: At least I bonded with other attendants over the shared experience

I agree with Aurian!

too bad for the signing but it's nice that you were able to take pictures!